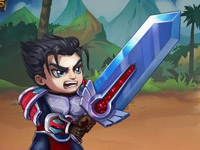 Hero Wars is a role-playing action game developed by Nexters Global. The game was published for iOS devices in December 2016 and for Android devices in March 2017.

In this epic fantasy game you play as the mighty hero Galahad. Some of the other heroes are being possessed by the demons and some are imprisoned. In order to free them, you have to battle across the lands of Dominion against Demons and their evil armies.

At the beginning of the game you will only have access to the Champaign mode. This is a story mode with many chapters. At each chapter you will be given many missions to complete. You will have to fight against 3 waves of evil soldiers during each mission. In the last mission of every chapter you will go against the Boss.

Your fight will play back and forth automatically. Every time a hero attacks an enemy, his super attack will load. Once it is fully loaded, the hero's images found at the bottom of the game screen will fire up. Use it to perform a special attack. The i...mpact of this attack will be huge. This is very important for your star score. You can also switch the battle to fully automated mode where you don't have to pick and choose when to perform these special attacks.

You will be given 1-3 stars for each mission. You need at least 1 star to unlock the next mission. But you have to gain 3 stars in all the missions to unlock the next chapter. There are also mini puzzles in-between somee of the missions. These are mini problem solving puzzles where you win tokens to unlock new heroes. The more heroes you gather, the bigger you army will be during battles.

Every time you win a battle, you will be rewarded with amour parts, skill potions, energy, XP's and coins. You have to keep upgrading your heroes with skills and armors in order to win big battles against the Bosses. The hero will increase in rank once he is fully loaded with a set of 6 amour parts.

Once you have performed enough battles you will get the opportunity to go to the Arena. Here you can battle against other online player's teams and rank up at the international rankings. These battles occur 100% automatically including the special attacks.


Yes, you can download and play Hero Wars for free. The game offers in-game products that you can buy with real money.


Can I play Hero Wars offline?


No, to play Hero Wars a constant internet connection is required.


What is the age rating for Hero Wars?


It is rated PEGI 12. Video games that show violence of a slightly more graphic nature towards fantasy characters or non-realistic violence towards human-like characters fall in this age category.


What devices is Hero Wars compatible with?


You can play this game on devices with at least Android version 5.0 or iOS version 10.0

Hero Wars Is available on multiple platforms. Click on the buttons below to download the game from the official websites of your chosen platform.

Welcome To Gamesimba! Here you can find a curated collection of free web games that you can play in your browser and free mobile games for your phone. You can find action games, adventure games, arcade games, puzzle games & many more fun games. Stop wasting time with bad games. Find good games to play here at FreeGamesCorner.
© 2022 Gamesimba. All rights reserved